Since the ouster of Sudan’s authoritarian President, Omar al-Bashir, in 2019, the country’s transitional government has faced the daunting challenge of holding former and current officials accountable for financial crimes and human rights abuses while reshaping legal and political frameworks to ensure accountability. Sudan’s nascent democratic transition, however, is threatened by its long history of corruption. Organized by Khatin Adlan Center for Enlightenment (KACE) and the Center for International Private Enterprise (CIPE), this event explored civil society’s role in combatting endemic corruption in Sudan and examined anti-corruption strategies, key reform efforts, and the inclusion of marginalized populations in these processes through civic engagement.

The discussion was held over the course of four days and was divided into three sessions:

1) Workshops to train Neighborhood Committees and Resistance Committees. These workshops included 60 participants from KACE’s Neighborhood Committees and Resistance Committees to train them on how to identify corruption related activities to raise public awareness, and to mobilize broader communities effectively to join the civil society efforts against corruption. During one workshop, Shaza Elmahdi of CIPE commented that corruption has been the biggest obstacle against the process of development in Sudan, but “there is also a bright window through which people now can see change after the December [2019] revolution.” She suggested three solutions to fight corruption:

2) TV-Broadcasted Special Program on Anti-Corruption Efforts during the Transition. A national TV station, Sudan TV, hosted Elmahdi and journalist Rasha Awad (Sudan) to discuss major challenges in fighting corruption in Sudan. Awad argued that corruption caused Sudan a significant loss of resources and the spread of poverty all over the nation. In her response on how to avoid going back to the pre-revolution era, Elmahdi highlighted the importance of using social media to monitor and expose corruption. She also emphasized that fighting corruption should be a process involving the general population, civil society, political parties, as well as the transitional government. She mentioned that the recent success of adopting “the right to access to information” law was highly important in the fight against corruption. 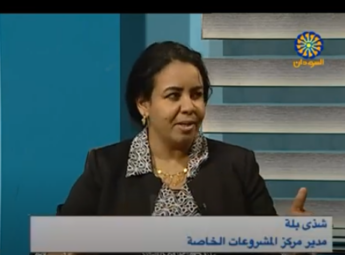 3) Private Sector Forum: Tackling Corruption Within Sudanese Businesses. The Private Sector Forum is a new initiative in Sudan, established in 2021 by CIPE, to help foster collaboration between the Sudanese business community, international organizations, and foreign aid agencies in Sudan. To fight corruption within the business sector in the country, this Forum identified gaps in addressing compliance and good governance while proposing reform agendas.