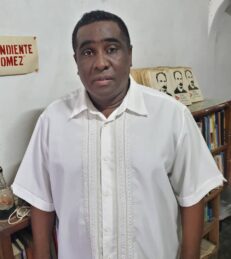 On November 30, Hernández Carrillo was visited by State Security Agents at his home. During his subsequent interrogation, State Security Agents mentioned that Hernández Carrillo could be charged with being a ‘mercenary.’ The basis of this charge is a result of Hernandez Carrillo creating a list of detainees from the protests on July 11 seeking humanitarian aid for them. Per the Cuban penal code, this charge could carry penalties of 10 to 20 years in prison, or even a death sentence. The US State Department called the mercenary charge “a spurious legal tool used to silence dissent,” in its recent tweet in support of Hernández Carrillo.

Hernández Carrillo has repeatedly been a target of harassment by the Cuban government. In April and May 2021, his house was surveilled 24 hours a day by state security agents. He is routinely threatened with incarceration and receives regular death threats for his pro-democracy activities. In March 2003, Hernández Carrillo was part of the “Group of 75” arrested as part of the Black Spring, a widespread government crackdown on writers and dissidents. He served eight years of the 25 he was sentenced to, and was ultimately released in February 2011.