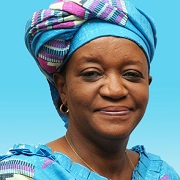 Zainab Bangura formerly served as the Chairperson of the World Movement for Democracy’s Steering Committee. From 2012 to 2017, she served as the United Nations Special Representative on Sexual Violence in Conflict with the rank of Under-Secretary-General of the United Nations. She was also the Minister of Foreign Affairs and International Cooperation in Sierra Leone from 2007 until 2010.

With nearly 30 years of experience in the field of governance and conflicts, Bangura has received a wide variety of awards, including the Hillary Rodham Clinton Human Rights Award from Georgetown University.