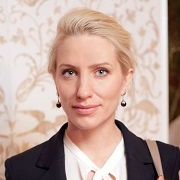 Svitlana Zalishchuk is a member of the Ukrainian Parliament, where she serves on the Committee on Foreign Affairs and is a chair of the Sub-Committee on European and Euro-Atlantic Integration. She founded the government watchdog group CHESNO (Fair) and co-founded the Reanimation Package of Reforms, a platform that unites 50 NGOs promoting democratic reforms in Ukraine. Having begun her career as a TV and newspaper journalist, she played an influential role in the 2014 Euromaidan movement with the social media platform “Centre of United Actions.” Zalishchuk is member of the World Movement for Democracy’s Steering Committee.