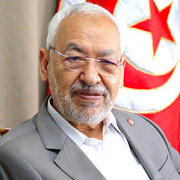 Rachid Ghannouchi is a Tunisian political activist and the co-founder of the Ennahdha Party, a moderate Muslim Democratic party formed in Tunisia in 1981. He spent 22 years in exile before returning to Tunisia for the elections in 2011. Ghannouchi was awarded the Chatham House Prize in 2012 and included in Foreign Policy’s the list “Top 100 Global Thinkers.”