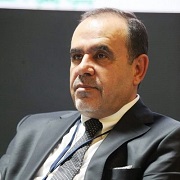 Oraib Al-Rantawi is the founder and director of the Amman-based Al Quds Center for Political Studies. He is also a frequent commentator and analyst on television and has produced his own show “Qadaya wa Ahdath” (Issues and Events). From 1978 to 1993, Rantawi worked as a journalist covering a wide range of topics, including the civil war in Lebanon and the Arab-Israeli conflict.