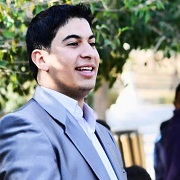 Obaida Farajalla is a Jordanian activist who currently serves as the Executive Chairman of the Arab Association of Enlightened Muslim Educators (AAEME), an organization which convenes Muslim leaders to discuss how religious values can be incorporated into contemporary Arab culture. In 2013, he served as the president of the Jordanian Youth Parliament. He also served as Director of the International Forum for Islamic Dialogue (IFID) in Jordan, a thriving regional youth empowerment network which has membership in more than 16 cities.