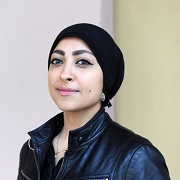 Maryam Al-Khawaja is a Special Adviser on Advocacy with the Gulf Center for Human Rights, which she previously co-directed. She was formerly the acting President of the Bahrain Center for Human Rights, and is a prominent activist for human rights and democracy in Bahrain. Al-Khawaja is very active on Twitter; as of March 2018, she had 112,000 followers and had sent 52,500 tweets.

In June 2011, her father was sentenced to life imprisonment on the charge of organizing and managing a terrorist organization for his active involvement in the pro-democracy 2011-2012 Bahraini uprising. Currently, Al-Khawaja has an arrest warrant and four pending cases, one of which is filed under the Terrorism Law and could carry a life sentence or death penalty.