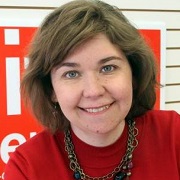 Anita Vandenbeld is a member of Canadian Parliament, where she is the Chair of the Parliamentary Women’s Caucus. Prior, she served as Resident Director for the National Democratic Institute in the Democratic Republic of the Congo, where she established a political party program during the November 2011 Congolese elections. She also served as a senior advisor to the United Nations, where she managed a global online network to promote women’s political rights and participation, called iKNOWpolitics.org. Vandenbeld is a recipient of the Canadian Peacekeeping Service Medal for her work in Kosovo.