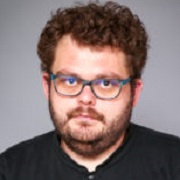 Andrej Nosov is a political activist and artist who, in 2009, founded the Heartefact Fund, an NGO that supports an open cultural space in the Western Balkans. In 2003, Nosov founded the Belgrade-based Youth Initiative for Human Rights (YIHR). Nosov was featured in the National Endowment for Democracy’s “30 under 30,” a list of inspiring young democracy activists, and was a Reagan-Fascell fellow at the NED in 2017.