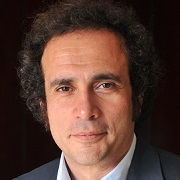 Amr Hamzawy is an Egyptian political scientist who currently serves as a senior research scholar at the Center for Democracy, Development, and the Rule of Law at Stanford University. Hamzawy is a former member of the People’s Assembly, after being elected in the first Parliamentary elections in Egypt after the January 25, 2011 revolution.

He was the research director of the Carnegie Middle East Center in Beirut, Lebanon from 2009-2010, and had previously served as a senior associate in the Carnegie Endowment for International Peace’s Middle East program for four years. He has also worked on the faculty at the American University in Cairo, Cairo University, and Stanford University. In 2014, he published the book A Margin for Democracy in Egypt: The Story of an Unsuccessful Transition. He contributes weekly op-eds to Shorouk, an Egyptian daily newspaper.