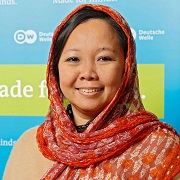 Alissa Wahid is an Indonesian psychologist publicly known for her work on multiculturalism, democracy, human rights, and moderate Muslim movements in Indonesia. She is the National Director of the Gusdurian Network Indonesia (GNI), an organization consisting of thousands of grassroots-level activists in more than 100 cities in Indonesia working to promote interfaith dialogue, active citizenship, democracy, and human rights. Wahid is a Civil Society Ambassador for Sustainable Development Goals in Indonesia. Due to her work, she received Indonesia Shine-On Award in 2015 from Good Housekeeping Indonesia magazine and the Women Award 2016 from Indonesia Marketing Week.